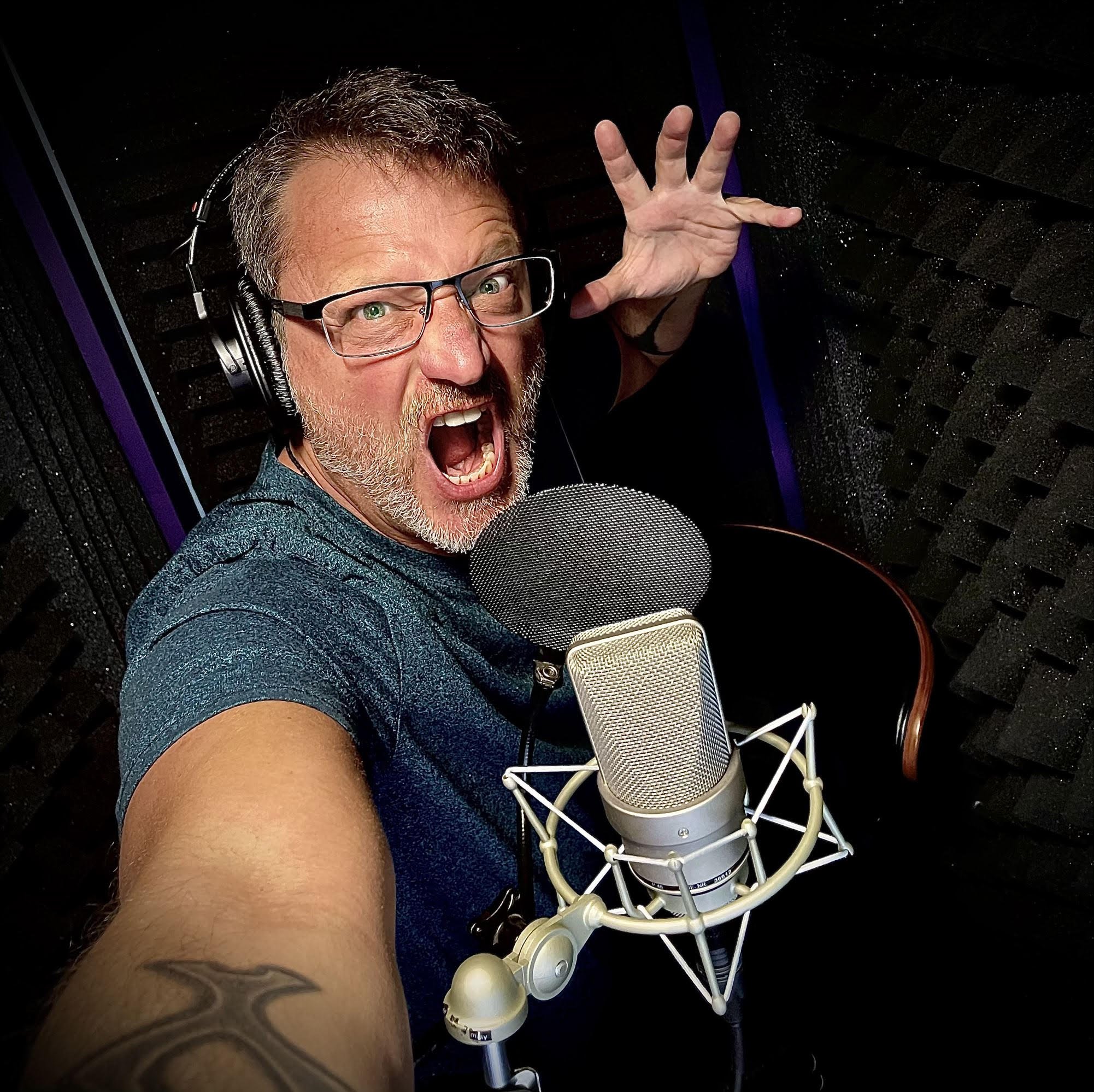 Veteran Voice Monkey Steve Blum is best known as the voice of "Spike Spiegel" from Cowboy Bebop, “Wolverine” from several incarnations of X-Men (animated movies, games, the Wolverine and the X-Men TV Series, The Super Hero Squad Show, X-Men Anime and more), “Zeb Orrelios” and dozens of other characters from Star Wars: Rebels,  “Orochimaru,” “Zabuza,” and others from Naruto, “Green Goblin” from the Spectacular Spiderman series, “Heatblast,” “Vilgax” and “Ghostfreak” from Ben 10, “Grayson Hunt” (Bulletstorm) “Grunt” (Mass Effect 2 and 3),"Zoltan Kulle" from Diablo 3, "Abathur" from Starcraft 2:Heart of the Swarm, “Tank Dempsey” (Call of Duty Black Ops), “Killer Croc” from Arkham Asylum, “Oghren” (DragonAge),“Vincent Valentine” (Final Fantasy VII), “Leeron” (Guren Lagann), “Jamie” from Megas XLR, “Storm Troopers” and many others in most of the Star Wars games, The voice of 7-11, dozens of Digimon and a gigantic list of other characters from Anime, Video Games, TV and Film. In 2012, Steve was inducted into the Guinness Book of World Records as Most Prolific Voice Actor in Video Games - appearing in almost 300 games (now over 400!)

Lately you can catch him as “Brimstone” in Valorant, The “Demon Bull King” and “Huntsman Spider” in Monkie Kid, “Golgan” and “Tuftan” in Kamandi: The Last Boy on Earth, “Zartan” on Robot Chicken, “Yumyan Hammerpaw” in Kipo and the Age of Wonderbeasts, “Jindiao” in Dreamworks’ Kung Fu Panda: Paws of Destiny, “Rytlock Brimstone” and many others in Guild Wars 2, more Star Wars stuff like The Mandalorian, Star Wars Resistance, Jedi: Fallen Order and as “Admiral Karius” in Vader Immortal, “Wheeljack” in the BumbleBee Feature film, “Tank Dempsey” in COD Black Ops,  “Grimstroke” in Dota 2, “Roy Evans” in Angel of Vine – the true crime podcast, as “Shoe” and “Sparky” in Laika’s The Boxtrolls, and as astronaut “Quentin Thomas” on Hip Hop superstar LOGIC’s amazing albums “The Incredible True Story,”  “Everybody,”  and “Young Sinatra 4” and on camera in Logic’s music videos for the songs “Everyday,” “Take it Back,” and “Icy.”

Also appearing as “Nar Est” and “Rasper” in Amazon’s Niko and the Sword of Light, “Frank” the flying monkey and others in Dorothy and the Wizard of Oz on Boomerang, as “Makucha” the Leopard on Disney’s  The Lion Guard and as Lovable Pub Thug “Attila Buckethead” and more in Disney’s Tangled television series! And a bunch of characters in Star Wars Rogue One, Solo, and Rise of Skywalker, Incredibles 2, Goosebumps 2, Shazam and Critters Attack feature films!

And every Saturday night, Steve continues to take the helm as "TOM," the robotic host of Cartoon Network's Toonami on Adult Swim.

If you’re interested in learning the art of Voiceover from a guy who does a LOT of it, check out Steve’s VO Webinar Teaching Series, newsletter and more at here.

See more of them on: